In this post, we take a look at what insurance companies and pension plans are, what risks they face, and how they are hedged. We also compute and visualize, in Python, some survival probabilities and expected payouts for the insurance companies using a real UK mortality table from 2020.

The three main categories of insurance are:

Each of these will be discussed in further sections.

Mortality tables are the most important tool insurance companies use to determine what the probabilities of survival are.

Here’s a real life UK mortality table for males from 2020. 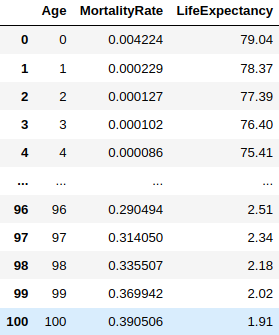 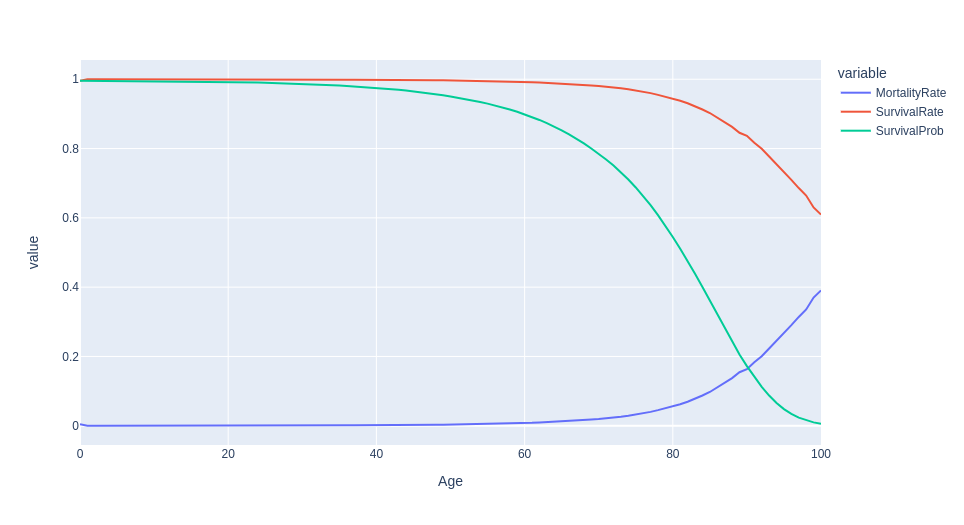 Here’s the code for computing the survival rate and probability.

Now, assume we are an insurance company and we want to sell a policy to a 30-year old male. Therefore, we need to compute our expected payouts based on his survival probability conditional on him being 30-years old. 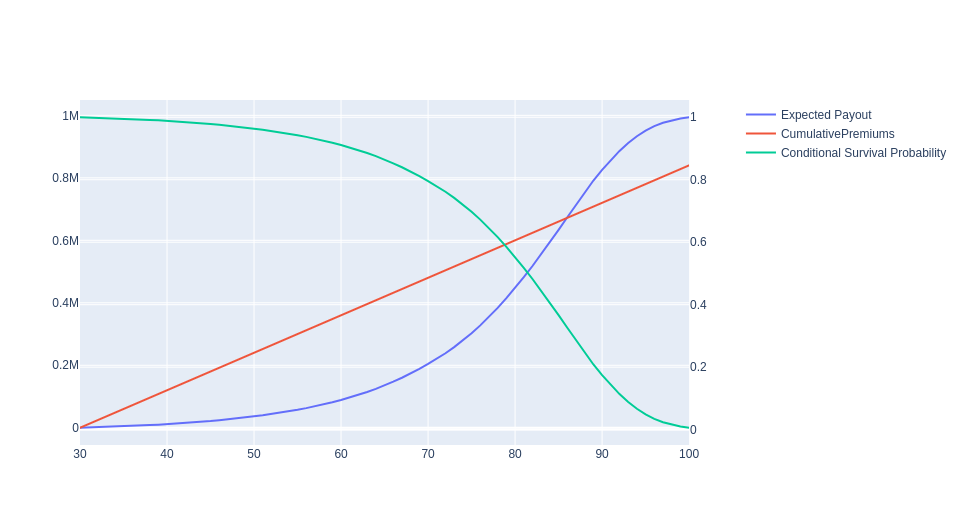 As we can see from the graph, for a $1 million face value policy owned by a 30-year old male paying $1’000 per month, the insurance company should expect, on average, to be in a deficit from the moment he reaches 85 onwards. This is plenty of time for the insurance company to increase the value of the premiums by investing them in safe assets.

Mortality risk is the risk of policyholders dying earlier than what the initial average life expectancy predicted at the time the contract was initiated.

The reverse of the medal is longevity risk, which is the risk of policyholder living longer than expected.

Clearly, these risks are the opposite, which is why insurance companies with business both in whole life insurance and annuities can offset these risks to some degree. The rest of the risks can be hedged using forwards on the mortality rate.

There are two types of pension plan.

Defined benefit plans are plans in which the employer pools money from its employees and invests it. There are usually guarantees in terms of the amount that will be received by the employee. This means that the company has to step in if the funds it invested didn’t grow to cover its liabilities. Obviously, this is very risky for the company and the reason why defined benefit plans are not offered anymore these days.

The more common plans nowadays are defined contribution plans, in which the employer invests the pension on the behalf of the employee. This means that the employer has no liability in the future.

There are many types of life insurance policies, with different characteristics and purposes.

Property-casualty insurance companies have to manage two types of risk. - risks which can be estimated fairly accurately from historical trends (e.g. the number of car accidents in a country), and where payouts are relatively uncorrelated and spread out across policyholders. - catastrophic risks, like hurricanes and earthquakes, which are rarer and cannot be predicted and where all policyholders require payouts at the same time.

While catastrophic risks are much harder to predict, they can be hedged somewhat using catastrophe bonds (CAT bonds), which offer regular principal payments to their holders and its face value at the maturity (like normal bonds), but in case of a catastrophe, the face value of the bond may not be returned by the issuer of the bond.

In the previous section, we talked about how car insurance companies can charge higher premiums for drivers who, for example, have more speed tickets, but not for people just diagnosed with an illness. Why is that?

The reason for this are two concepts called moral hazard and adverse selection. Moral hazard refers to situations in which insured parties behave in a more risky manner, because they know they will receive a payout if things go awry. For instance, if you have insurance on your laptop, you may not be as careful with your cup of coffee around it.

Adverse selection refers to insurance policies which attract the riskiest policyholders. For instance, a policy which does not discriminate among car drivers will likely attract the worst drivers, as they will pay the same premiums as everyone else, even though they drive most recklessly.

Whilst banks have the Basel Committee recommendations, insurance companies have no globally accepted capital requirements.

In the United States, each state legislates its own capital requirements for insurance companies.